Larry BarchLarry Barch from Barricade demonstrates fire blocking gel, which can be applied hours before a fire approaches a house, it’s surroundings and/or a vehicle. (Beatrice Richardson • Herald/Review)

Herald/Reivew
Days after the Monument Fire reached a point of containment, Dan Gouldner and Larry Barch raced from Ohio toward Sierra Vista with a product they knew might have made a difference.

Somewhere in Texas, the recreational vehicle full of their product broke down, leaving them little choice but to off-load what would fit in a rental car and continue their journey to Arizona’s southeast. “We were a bit late for the event in Arizona, but we still wanted people know about our product,” Gouldner said. “We couldn’t be much help this time, but we can definitely prevent that kind of destruction from happening again.”

To prove it, Barch dipped his hand in a bucket of the special gel, then pointed a lighted blowtorch at his fingers.

Barricade, the fire blocking gel being promoted by Gouldner and Barch, has made national headlines for its success saving homes and staving off wildfires. The gel is on the U.S. Forest Service Qualified Products List and has been the subject of coverage on the “Today Show,” CNN, and other national television broadcasts.

The inventor of Barricade is John Bartlett, a former Florida firefighter. While responding to a routine trash can fire, Bartlett observed a disposable baby diaper that did not burn. He investigated what made the diaper fire resistant, and ultimately developed the solution that has saved homes and business from wildfires all over the country.

After leaving Sierra Vista, Gouldner and Barch drove to New Mexico, where they made a presentation in the governor’s office during the wildfire that devastated the Los Alamos area.

“We ended up selling a bunch to the U.S. Forest Service in New Mexico, and made several sales to homeowners in that area,” Gouldner said.

One of the homeowners, Buddy Laird who purchased Barricade and applied as the wildfire was bearing down on his property, later reported he was able to save his home. Neighbors were not as lucky, Gouldner said. Thirty-five homes close to where the fire gel customer is living were destroyed by fire.

“He had a fuel tank that didn’t blow up, and he was able to save his home,” Gouldner said.

Barch talked to Laird after the fire, sharing pictures of property that was destroyed by the fire in New Mexico.

“Two propane tanks were coated and the paint never even blistered,” Barch said. “The shed in front of them burned to the ground. All windows in (Laird’s) house and the screens were intact,” Barch said. Similar stories are told on the Barricade website, www.firegel.com.

Vic MacKenzie, a firefighter with the De Luz Fire Department in San Diego County reported that he and his fellow firefighters saved 11 homes in November 2003 with Barricade gel. “We didn’t lose a home the whole time we were there” MacKenzie said. “I think this product will become like having fire sprinklers in your home,” he added.

He described how they gelled a propane tank with Barricade and “… the flames were wrapping themselves all around the tank when the firestorm blew over.”

The gel is purchased from Florida-based Barricade and shipped to the homeowner. It is then applied to the structure using a garden hose.

According to the company, Most losses occur not from direct flames but from embers that land on a structure from miles away. Barricade encapsulates the structure or any belongings in a “wet” blanket that will last approximately 8-24 hours. 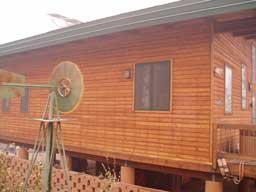 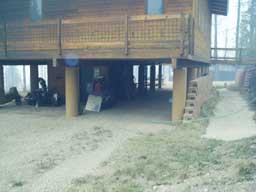 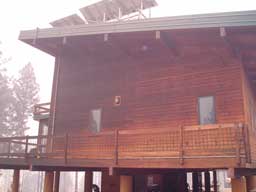 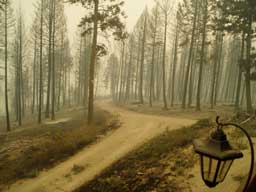